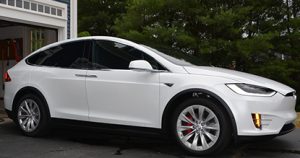 In the past two blogs we’ve discussed the two Tesla Model S electric cars we have for rent here in Boston, a 2013 and a 2016. While there were improvements between those year-models, they both have many of the standard features. After all, they’re the same models. But with the 2016 Model X, you’re getting something quite different.

The Tesla Model X has only been around for just over a year, having been released in September 2015. As of this month, there are fewer than 17,000 in the entire world, including both 2015 and 2016 models. Good luck giving a friendly wave to one in passing, because you probably won’t see another the entire time you rent this Tesla!

So What Is It?

The Tesla Model X is a luxury crossover SUV sportscar. Wait, what? How can an SUV be a sports car? Well, just like our Tesla Model S, the Model X P90DL comes with Ludicrous Mode. This means you can go from 0-60 in under 3 seconds. In a crossover SUV. From an electric car. Insanity!

The most distinguishing feature of the Tesla Model X are its gullwing doors that allow access to the second and third row of seats (did we mention that the Model X seats up to seven people?) Gullwing doors were first seen in the 1954 Mercedes-Benz 300SL (click here to see it, but if you have an affinity for classic cars be sure to sit down first…it’s a beauty!) The DeLorean is the most popular vehicle out there with gullwing doors, made popular in the movie Back to the Future.

Have you ever thought “I need to drive the most amazing crossover SUV ever imagined”? Probably not, but that’s what you’ll get when you rent this Tesla. Sign up to drive our 2016 P90DL Model X Tesla right here.