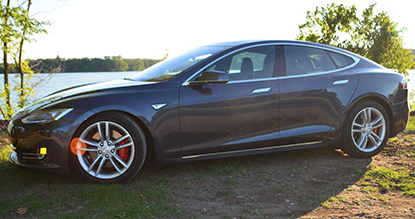 In our last blog we talked about our most affordable Tesla rental, our 2013 Tesla Model S P85+. It’s an amazing vehicle, and certainly a steal at that rate. But the only thing that will beat a Tesla is an even newer Tesla, and that’s what we’re offering with our Tesla Model S P90DL.

Just like our 2013, the 2016 Model S seats up to seven people, has a 17” touch screen, and has the highest safety rating attainable. Its range is approximately 270 miles on a single charge, and you can charge up at any of 24 supercharging stations throughout New England. It handles like a dream, and because it’s all electric you can drive around all day without any guilt.

There’s the P90D and the P90DL. What’s the “L” all about? Ludicrous mode! With a nod to the movie Spaceballs, Tesla Motors has named their insanely fast version Ludicrous, meaning that its 762 horsepower (!) launches you from 0-60 in 2.8 seconds. It’s what’s referred to in the auto industry as “stupid-fast.” Now, we need you to be careful with our Teslas. Don’t go doing anything that will put you in danger. But if you need that get up and go to pass someone on a two-lane highway, this will make it easier.

You could drop $72,000 on a new 2106 Tesla Model S P90DL, and honestly we wouldn’t blame you; it’s a nearly flawless vehicle that most people lust after. But why not take an extended test drive first to make sure it’s the right vehicle for you? Rent it for a $299 for a day, or get that price down to just $245 a day when you take it for the whole month. (Prices are valid as of October 2016, subject to change.)

When you are looking for the ultimate sedan, our 2016 P90DL Model S Tesla Rental is what you need. Sign up to rent it right here.