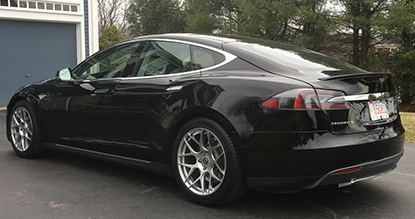 Renting a Tesla isn’t like renting your average car. Sure, every car is getting more advanced as the years go by, but there are some aspects of a Tesla that are well ahead of your average automobile. Let’s take a look at a few things you’ll notice right away.

At 17” diagonally, Teslas have the largest touchscreen of any car out there. (It’s about the size of the average home television from the late-1980’s!) The screen controls many aspects of the car that were once buttons, including climate control and radio. Basically, if it’s not the shifter, windshield wipers, hazard lights, or turn signals, it’s controlled from the screen. Make sure to familiarize yourself with it when you’re not driving so that you can better control your environment.

The interior of a Tesla is incredibly roomy. Most of this has to do with what it doesn’t need: specifically, the engine and the drivetrain. When those go away and you put the batteries underneath you, the entire interior just opens up.

We’ve mentioned it before, but it bears repeating: Teslas may not be the fastest car in the world, but the acceleration is beyond insane. Just Google “what’s the most interesting feature of a Tesla?” and most people will call out the acceleration long before they get to the touchscreen or the roominess. Going from 0-60 in under three seconds…we’d call that an interesting feature! (Also, please be careful. Very few of us are accustomed to this kind of power.)

Renting a Tesla is a great experience, and if it’s your first time you’ll never forget it. Click here to learn more about Tesla rental in Boston!